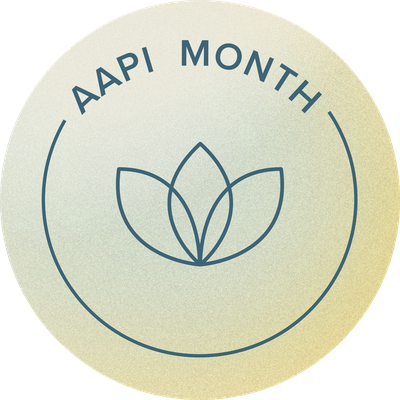 For Asian American and Pacific Islander Heritage Month, we’re highlighting some of the people and brands you should know about all year long.

As a kid, Lindsay Arakawa was in a sticker trading club, where she and her elementary school friends would gather with their Sanrio sticker books. Now, she makes lettered photo art that has the feel of a sticker book, or a piece of lovingly decorated snail mail from a friend.

"Give yourself the time you need," reads one of her pieces. The blue, sparkly letters frame an outstretched arm with bracelets on the wrist and, on the palm, a huge, glossy rhinoceros beetle. Arakawa originally took film photos to record things she found beautiful — a flower, the perfect bright noon light — but after developing them, she put them away in a shoebox under her bed, unsure of what to do with them. Adding lettering to them became her way to give them a new life.

A fifth-generation Japanese American, born and raised in Hawaii, Arakawa moved to the mainland United States for college. Two years ago, she moved to Tokyo, where she works by day as an art buyer. Now, Japan appears in her artwork as busy crosswalks, apartment balconies, cherry blossoms falling like snow, a vending machine's labeled compartments.

Hunker chatted with Arakawa about what inspires her, what it's like to live in Japan as a Japanese American, and what makes her feel at home.

​Hunker​: What's one thing that inspires you in your work that someone might not guess?

​Lindsay Arakawa​: In the summer of last year, Ray [my partner] and I were riding our bikes around everywhere, and it was really nice because we were riding to different places that you wouldn't usually see if you were riding the train. That summer, I was seeing a lot of signage on the streets — like at elementary schools, sometimes the text that they use for their posters is just so cute that I'll remember how something is drawn ... I really love that. Or even at temples, the way that they integrate icons or shapes into their signage.

​Hunker​: Where do the words come from for your images?

​LA​: They truly are a reflection of how I'm feeling in that moment. It's kind of funny, if you scroll back to when I lived in New York, a lot of it was like anger coming from dating and being in New York and being single and sexy, or whatever. Sometimes they're lyrics that I can relate to, but very rarely now are they quotes from other people. Sometimes it's just how I'm feeling in that moment, and a lot of times it'll be the same feeling said many different ways ... It's created with the intention of me being like, "I'm getting this feeling out and I just need to kind of express myself." And the fact that other people share the same feelings is an added bonus.

​Hunker​: Do you have any particular artists working today who you really admire?

​LA​: I do have this one photographer, where every time they post something on Instagram, I'm always just like, how? This is so beautiful. I'm blown away every time. She's a photographer in Shanghai, and her name is Zhang JiaCheng. I really love her photography. She just integrates her culture in a way that feels so pure and honest. It honestly feels like she's storytelling, which is nice.

​Hunker​: Is that something you think about, what your artwork communicates about your own culture?

​LA​: Yeah, I mean, I definitely want it to feel as genuine to my experience as possible, but I am in a weird space of being very American while also being ethnically Japanese, and so it's basically like, how do I represent both worlds with my work in a way that doesn't feel like I'm trying — I don't want to ever come off as like I'm trying to be something that I'm not.

​LA​: I think my experience is a little different from a lot of my Asian American friends who I've met on the mainland, but growing up in Hawaii, I was always surrounded by a very strong, tight-knit Asian American community, where everybody had a very similar experience to me, where all of my friends were gosei or yonsei (fourth-generation). We all had this very deep appreciation for our culture, but we were also very American at the same time. I didn't realize how special that was until I moved to the mainland for college, and that's when I felt like I was starting to be categorized for the first time. I went through a rollercoaster of identity crisis moments, where I wanted to be Asian and then I didn't want to be Asian.

After I left California to go to New York, I felt like, "Okay, I need to take another step back and think about what I've become, who I am now," because I went to go work at an online media company where everybody was so self-expressive ... It was a very formative three years of my life living in New York, where I was really kind of reclaiming my identity. I always knew that I loved being Japanese American despite being gosei, but nobody in my family had really been [to Japan]. We didn't have a lot of ties to Japan ... I felt this desire to move here after going through trying to figure out who I was on the mainland.

​Hunker​: Do you feel like you're getting what you were looking for, living in Japan?

​LA​: You know what, honest answer, no. But it's a new sort of challenge that I'm facing where I kind of felt like if I came here I would finally feel like I belonged, but because I'm so, so American, it's kind of having the opposite effect, where I'm starting to realize how not Japanese I am, and it's kind of trying to figure out okay, what does this mean now? I have only been here for two years, and I plan to stay here. I do really love being in Japan more than anywhere else I've lived outside of Hawaii. It is very nice, even though I don't necessarily feel like I'm a part of the community yet, just because the way that I dress, the way that I express myself, the way that I think is so different from somebody who grew up here.

But it is kind of nice to look around and everybody kind of looks like me again... moving here was the hardest decision I've ever made for myself. But I am really glad that I did it because my life has changed so much within the past two years, and I wouldn't trade it for anything else.

​Hunker​: In your home, where is the spot where you feel the most comfortable or the most you?

​LA​: Sometimes I'll just go into the bathroom and play Animal Crossing for a very long time and I'm not even using the bathroom, I'll just stay there. Because Japanese apartments are pretty small, and Ray and I are just both here the entire day. Sometimes, he'll be like, "What are you doing in there?" And I'm just like, "Don't worry about it, just chilling."

We have this very tiny balcony, and we live literally right next to the train tracks. And so there are trains constantly coming by us and we live right above a yakiniku restaurant and so we're constantly smelling grilled meat. And I can see into Daiso from my balcony. In the summer I just wanted to spend more time outside and so I went to IKEA and bought a bunch of outdoor patio furniture and I would go out there almost every day with my Aperol spritz, read a book, and try to work out there. That's a nice happy place for me because it's in the sun, I'm breathing fresh air, kind of, with hints of yakiniku and the train. And everyone in Daiso who's shopping in the pillow section can see me, which is fine.

​Hunker​: What are three things in your home that hold the most value to you, excluding people or creatures?

​LA​: I don't know if I wanna expose myself, but maybe I should because who cares? I have this stuffed animal that I grew up with. It was the first stuffed animal in my crib that I gravitated towards, and it kind of just became my second person almost from a very young age. It's a rabbit that looks like a rag these days. But that's like, if the house was burning and I could only grab one thing, it would be Bob.

​Hunker​: Finish this sentence: Home is where...

​LA​: I think for me, currently, home is where you feel the most comfortable. Because I think comfort is the most important thing for me these days ... Emotionally, the first year of being in Japan was so difficult, where I literally thought about moving home almost every day, but now I'm at a point where I do feel really comfortable being here, mostly because I have my partner, Ray, who I live with now. And he provides a lot of comfort for me.

Jenay Ross On Writing, Plants, and Finding Comfort at Home

Jennifer Pastiloff: Manifesting Her Home in Her Happy Place

Hunker Down With Designer Chanae Richards of Ọlọrọ Interiors

Being Home: A Minneapolis Native Returns